This is shaping up to be a really great event. Jamie Lawson has become very well known in Ireland due to the huge exposure of his single “Wasn’t Expecting That”. A deal with Universal and a year spent touring (including slots at every major Irish festival) followed, cementing his reputation as a great writer and performer. It’s his first show in Drogheda.

For SJ it’s a hometown show to finish off a very exciting year – the release of the album Blood and Bones (to universal critical acclaim), two Irish tours, heavy radio play for the single “Chin Up”, TV appearances and a slot at Electric Picnic. It’s also a great follow-up to his sold out show at Drogheda’s Droichead Arts Centre during the summer. 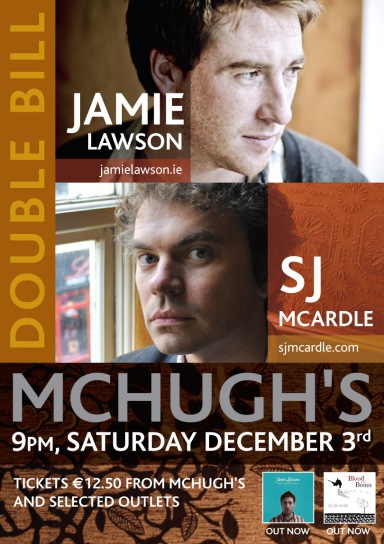 Tickets are now on sale from the following locations:

If you can’t get in to any of the sales outlets, tickets can also be reserved by texting or ringing Adrian on 086 840 9090. Some tickets are expected to be available at the door on the night, but bookings so far have been good, so it’s worth booking to be sure to get in.